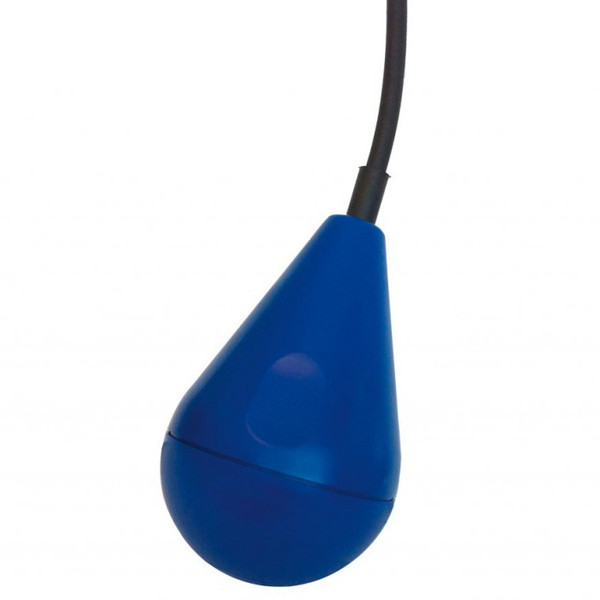 The E-Fly Level Regulator is a float switch that allows electrical equipment to start and stop automatically (usually pumps, but also solenoid valves, alarms, etc.) when a prefixed level has been reached. Normally connected to a control panel or directly to the pump.

These Float Switches are specifically designed for Sewage Water, Industrial Waste Water with suspended residues and in turbulent water. It's heavy body, which is also bulky with a smooth surface makes it ideal for regulating water with heavy solids like sewage or liquid animal feed.

These Float Switches come with the a 3 core PVC cable (3x1) which can be used for filling or emptying according to the cables that have been connected.

The Float is a double liquid proof chamber for maximum reliabilty and a counterweight is built into the body of the float.

The switch angles are +10o/-10o a wider angle is also available, ask for details.

The E-Fly Float Switch complies with CEI EN 60730 standard and therefore complies with the fundamental requisites of Directive 2006/95/CE, also complies with the standards IEC60079-0:2011-06 and IEC60079-15:2010-0. The device which can be defined as a tilting, floating switch has been specifically designed to operate in water with suspended solids and turbulent water.

PVC: This float switch comes with PVC Cable as standard. This is a PVC sheathed cable with PVC insulated cores equal to or exceeding EU Harmonised Code H03VV-F and British CMA Code 3183Y. Light duty, suitable for temperatures of up to +60oc.

H07RN-F: You can upgrade the float switch cable to H07RN-F. This is a heavy duty flex with rubber insulated cores and polychloroprene or equivalent outer sheath. Increased wear resistance and flexibility compared to PVC cable, suitable for temperatures of up to +90c.

These Waterproof TeeTube T Electrical Cable Joint (3 cable entries) can be used to fit Float Switches to Pumps where pump is submersed in the water tank.

IP68 rated so therefore (assuming fitted correctly) perfect for use underwater and in situtations where the cable joint may be submersed or areas prone to occasional flooding. Also suitable for use in areas of high condensation or humidity like for example, water tank turrets, basements and manhole chambers. If in double please consult a professional before installing this item. For more details see the Waterproof 3 Way Cable Joiner page.