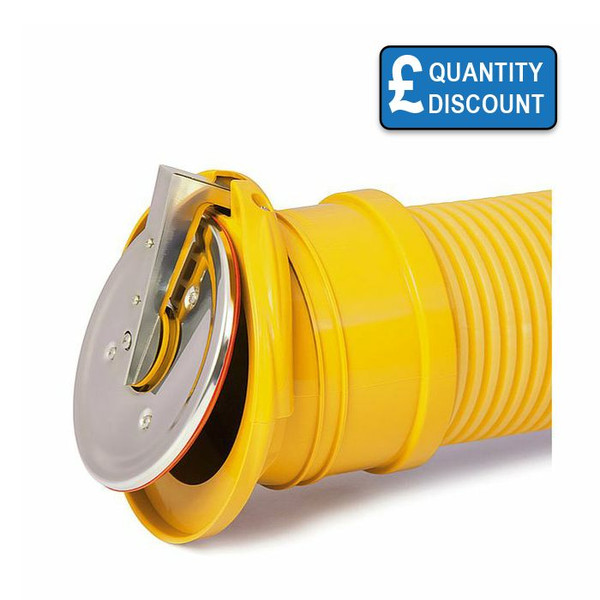 Non Return Valve with universal connection system can be installed at the end of land drains and other unperforated corrugated pipes, from 72mm to 100mm diameter.

What is a Drainage Flap Valve?

Drainage Flap Valves are innovative devices used to prevent flooding caused by the back flow of storm water. Backflow can be caused by intense rain, thaw or floods. The valves prevent backflow and silting due to the increasing water levels above the drainage level.

Where the Flap Valve has a metal Faceplates (like these), they are also an effective rat barrier to your land drainage system. The metal stops the rodents from chewing through the flap facepate of the non return valve and protects your drainage system from blockage due to rodents building their nests in the pipes.

Where can these Flap Valves be installed?

These flap valves are designed to be installed at the end of land drains and other unperforated corrugated drainage pipes leading storm water to soakaways or rivers. They are sometimes referred to as Outfall Flap Valves.

Comes with Universal Coupling which fits 72mm to 100mm pipes.

Easy to install. The Non-Return Valve simply slips on to the end of the pipe.

Unfortunately we cannot accept returns for this product when it has been fitted. If you are unsure as to whether this is the correct product for your system, please contact us before purchasing. We will happily offer free, impartial advice.

This flap valve is equipped with a chromium-nickel cover (A) protecting the flap and gasket. Additionally a chromium-nickel cover of the lever (B) has been designed into the Non-Return Valve to protect against rodents, atmospheric and the environmental conditions (eg. river flow). Flap valves have a Universal Coupling system built in which ensures a tight fit of the valve to the pipe and effectively keeping the non return valve in place.