As the world is increasingly aware of plastic in the ocean and the problems that is causing, many of us are reducing our use of single use plastic, trying to shop plastic free in the supermarket veg aisles and taking part in beach cleans. We try and do our bit, but what about the rest of the plastic that ends up in our oceans?

The amount of plastic going into our oceans worldwide is over 8 million tonnes each year. We have to start looking at the sources of plastic pollution and work out ways to tackle it before it reaches our seas and wildlife.

Global sources of Primary Microplastics in the Oceans

In the 2017 IUCN report on Primary Microplastics from petrochemical origin in the Oceans they identify seven sources of microplastic (size less than 5mm) that end up in our oceans. These sources are: Plastic pellets, synthetic textiles, tyres, road markings, marine coatings, personal care products and city dust.

In this post we are focusing on plastic pollution sources from roads. The ICUN found three primary microplastic sources from roads, specifically the degradation of vehicle tyres, road markings and the accidental spillage of plastic pellets during transportation. 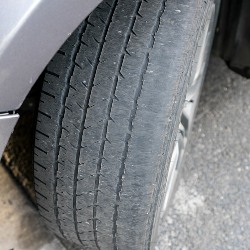 Vehicle tyres wear out as we drive (so do brake pads and disks). This is something we are all aware of, as every car, lorry and bus driver needs to change their tyres every so often to remain safe on the roads. How many of us though stop to think where the bits of tyre have gone and to consider the impact that has on the environment?

Tyres are made of a blend of synthetic polymers, namely Styrene Butadiene Rubber (approx 60%) mixed with natural rubber and many other additives. Tyre dust formed through abrasion of tyres on the road surface are either spread by the wind or washed off the road by rain.

Swedish and Norwegian researchers have found that a large fraction of particles found in the sea seem to originate from tyres (Sundt et al., 2014, Essel et all., 2015).

The ICUN estimates that 28.3% of primary microplastics worldwide that end up on the oceans are from synthetic rubber in tyres. 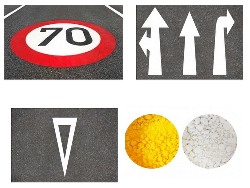 Road markings (white lines, double yellow lines, stop lines etc) are applied and reapplied to roads during the development of the road infrastructure and during maintenance. Different types of paints are used including acrylic paints, thermoplastics, preformed polymer tape and epoxy. In Europe thermoplastics are the most commonly used to mark roads.

The plastic road marking paints are worn away from abrasion by tyres and weathering. Like tyre dust, microplastics from road paints are either spread by wind or washed off in the rain. The latter is called stormwater runoff.

Micro plastic pollution from road marking paint equates to 7% of global releases of primary microplastics into the oceans according to the ICUN report. 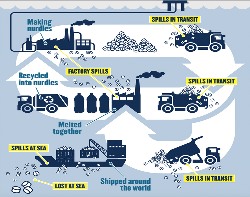 New plastics and recycled plastics are most easily transported around in the form of pellets (2-5mm in diameter) before they are formed into products. These small pellets, sometimes known as nurdles, nibs or mermaid tears, can be spilled into the environment through small or large incidents along the manufacturing chain. Sometimes spilled at sea from containers, they can also be spilled as they are transported on land.

Less than 0.3% of microplastics that end up in our oceans worldwide are from plastic pellets spilled on the roads. However each bulk truck can carry about 2 billion nurdles. The plastic recycling industry has acknowledged this is a problem and set up an initiative 25 years ago called Operation Clean Sweep to encourage businesses within the industry to help keep nurdles out of the environment.

The IUCN report is a global analysis. What does the picture look like for us in Europe? 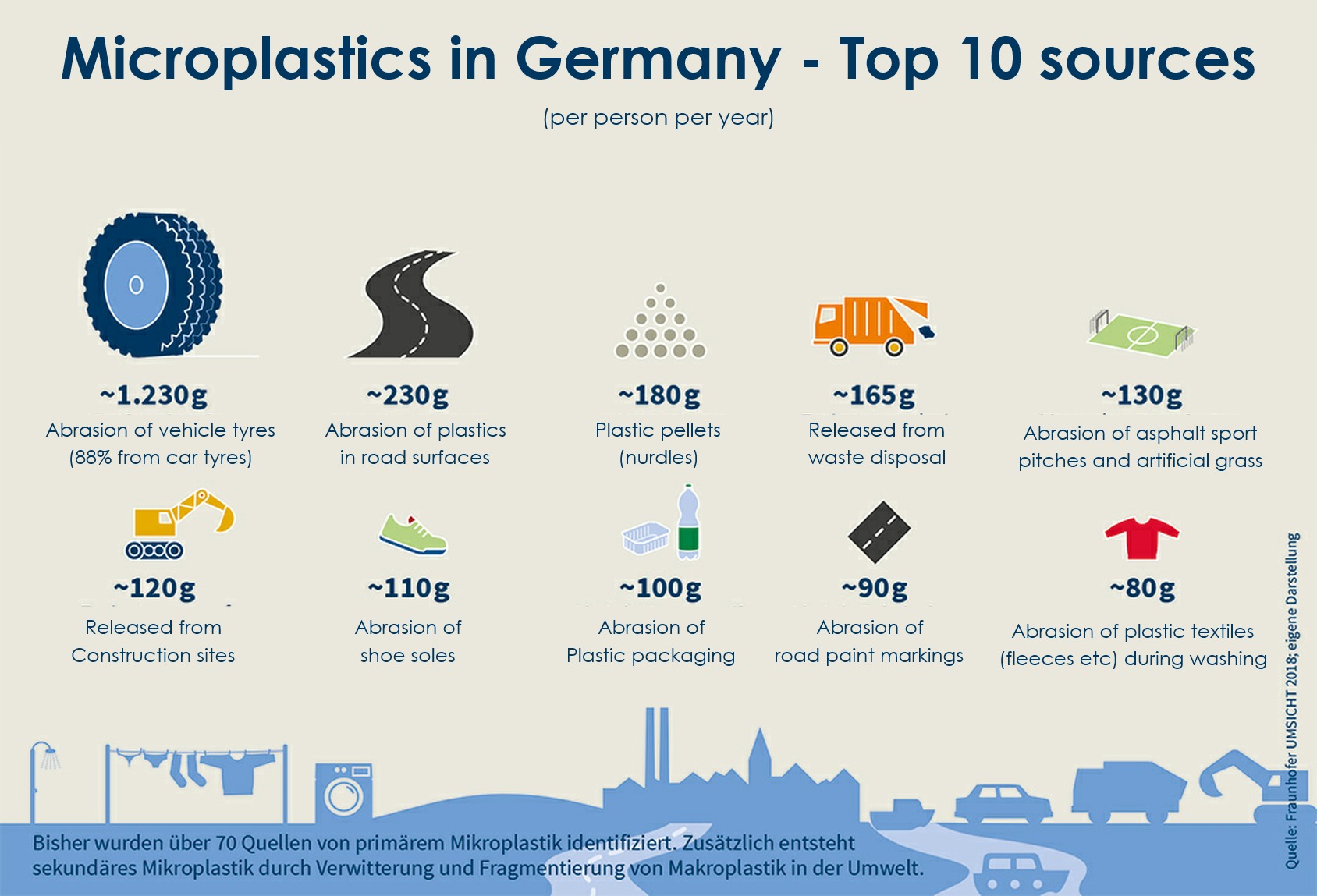 The top ten sources of primary microplastic in Germany identified in the report are (in order of approximate weight per person per year):

The German report identifies a number of different microplastic sources compared to the ICUN report, which isn’t too surprising as the global report amalgamated nine sources of microplastics (including synthetic soles of footwear, artificial turfs and others) under “city dust”. These quantities of the different sources released into the environment are likely to vary significantly from country to country. It is interesting therefore from a UK perspective to see the detail for Germany which is a similar economy to the UK.

The other sources of microplastics identified within the German report that come from roads, that have we not already mentioned in this post, include; abrasion of plastics from road surfaces, micro plastics released from waste disposal and the wearing out of shoe soles.

The report doesn’t go into detail about how many of these microplastics end up in the oceans, stay in the land environment or are swept up. Road sweeping budgets are under pressure in the UK. 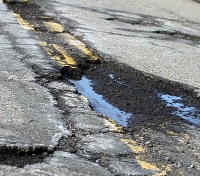 Abrasion of plastics from within road surfaces

Roads wear out. Avoiding pot holes and waiting at traffic lights while long stretches of roads are re-tarmaced is all part of driving. Unless you are in the highways industry it is likely you haven’t given much thought to what roads are actually made of. Tarmac and Asphalt are well known names associated with roads.

A close read of the Asphalt safety datasheet from Tarmac states in Section 3 that:

“Asphalts are mixtures of aggregates and bitumen. Bitumen is a hydrocarbon derived from the distillation of petroleum crude oil, but may be synthetic or modified by the use of polymers and other chemicals. Bitumen content is typically <10%. Other materials such as cellulose fibres, latex and other additives may be added to the product. “

Without a full declaration of all ingredients it is difficult to say what “plastics” are in any one road surface. What the roads are made of in Germany compared to the UK we have not researched. However some words in the above paragraphs that provide guidance to the microplastics that the German report suggests include “polymers”, “latex” (latex often means a blend of natural rubber and synthetic rubber), “road planings” (we have already established that road paint markings often include plastics) and “recycled construction and demolition waste”.

Thought provoking at least. And it certainly means that Councils and others looking to re-surface roads entirely or partially from recycled plastic should perhaps investigate the potential consequences. Vehicle wear out roads, and therefore road material will end up in the wider environment, either carried within the stormwater or blown by the wind. 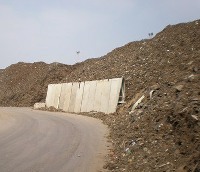 How much of these plastics are released directly onto the road, washed off vehicles during transport or when cleaning the fleet or blown by the wind into the environment the German report doesn’t detail. What quantity of waste disposal microplastics that end up in the sea is also uncertain as different report authors have used different values from 2% to 47%.

Wearing out of synthetic shoe soles 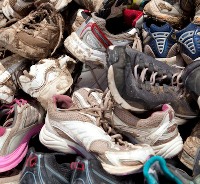 110g of microplastics wearing from shoe soles per person per year does seem like a very high value tous. The analysis of microplastics in the environment is still rather new and researchers across the world are trying to find ways of understanding the situation. Nonetheless it raises new thinking.

Secondary Microplastics in the Oceans

Secondary microplastic pollution into our oceans is described in the IUCN report as larger plastics that degrade into smaller plastic fragments. In relation to roads, this essentially is litter. Their report didn’t cover this aspect of plastic pollution in the ocean.

Litter in the Oceans (macroplastics) 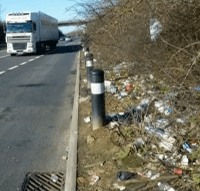 Many national environment agencies and scientists have begun to analyse the sources of macroplastics released into the environment. Very little conclusive data that can be extrapolated currently exists. The Norweigian Environment Agency, for example has identified four sources of macrolitter from land but the data is described within their Sources of Microplastic Pollution to the marine environment as being either poor, anecdotal or no national data.
What is clear from observation is that plastic pollution in the form of litter exists on our roads. Everything from plastic bags, to coffee cups and industrial waste either from accidental bin overflows, fly-tipping or littering.

From the two reports above, we have identified seven broad areas of plastic pollution that can be directly pinpointed to being located on (or near) roads;

It therefore makes sense to target stormwater run off from roads to collect and to treat the runoff and retain microplastic and macroplastic pollution so that it can be properly disposed of before it reaches rivers and seas.

How to Reduce Plastic Microplastic Pollution from Roads

Installing stormwater treatment devices at critical locations, for example in car parks, near artificial sports pitches, near roundabouts and locations where vehicles break is a sensible approach to remove microplastics from roads. It will treat the stormwater runoff at source rather than letting the microplastics escape to the rivers and oceans.

When building new transport and drainage infrastructure, installing stormwater treatment devices like the 3P Technik HydroShark and HydroSystem is simple. These products are also easy to retrofit into exisiting drainage systems. Availabe in different sizes to suit the connectable surface area to be treated. Contact our Technical Team for advice and further information.